One thing about following people and copying everything they do is that you will always be at least one step behind them. While none of us are completely original, meaning all of us are inspired by someone on this flight called life. There are some people with integrity on this journey with you who legitimately don’t have a problem acknowledging that you inspire them versus those who sneakily try to impersonate you and what you do and then act as if they don’t know what they’re doing is wrong. Disgusting creative crooks!

Sadly, some people are nothing more than copy cats and think they’re going to take off stealing your ideas and insight. Nope! The most offensive part about these fraudulent clones is they will never give you the credit and admit that you inspire them. That’s what makes it so irritating and disrespectful. On this flight called life, if you have some kind of special anointing, and we all do; you will come across those people who secretly watch you and stay close to you so they can almost use you as their personal muse.

For many of us, we can become afraid to share our plans and project details with anyone because there’s always some creative creep out there who can’t come up with anything on their own. My advice for you is copyright your stuff. Keep making whatever you make. Don’t stop producing and creating in spite of the wanna be’s. Don’t become bitter, just keep getting better. At the end of the day, people see! People know! No one is dumb and they can all put two and two together. Those observing know the difference between the original and the imitation. When it’s all said and done, everyone will know who’s authentic and who’s a fake. Continue to soar! Stay above the pettiness and the low level mentality of those who don’t take the time to study their craft for themselves. While they’re trying to be you, it’s effortless for you because you are you!!!! No one can ever steal the uniqueness of your message. They can copy your music, writing, play, book, message, style, but they can never be you!!!

If no one tells you that you inspire them, remember that many of the greats never got public praise until they were gone too. I know it’s sobering, but work on your craft for your children and your children’s children. This stuff you’re creating is part of your legacy. Be ok with that. That your work will be around long after you leave here and you will still be inspiring people when you’re gone!!

Maybe the real moral to the story is, your creativity is not meant for you to be applauded after all. Isn’t it the applause that makes people cocky and arrogant anyway? The reality for creatives as far as I’m concerned is, we can’t take credit for the unexplainable magic we create anyway. It comes from a source that’s bigger than us. Be honest! You know that’s not you. That’s a special gift that you can’t actually take credit for. So why worry about taking credit for something we were only favored to be able to produce!

I know it’s annoying when people steal your ideas, but keep creating. At the end of the day, they can’t steal your brilliance! Keep ascending. Don’t let the creative bandits take you off course. You’re going somewhere great!!! 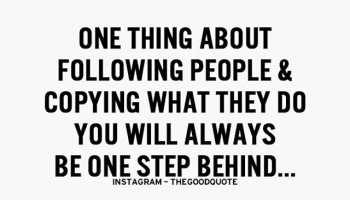