When it comes to traveling and experiencing new places; a lot of people have a great deal of concern about whether or not they’ll be able to get around because of the language barriers in front of them. If you’re someone who wants to see the world, one of the first realities is; everyone is not going to speak your language (insert can I get an amen).

This got me to thinking this morning about how difficult it is for a lot of people to grow and become the best possible person they can be; simply based on their lack of understanding when it comes to other people. Most relationship problems boil down to communication issues also known as language barriers. Too many people are trying to relate to each other from two completely different places and lack the ability to understand what the other person is trying to say. What’s even worse than not understanding the person you’re in a relationship with, is not trying to understand them. Now let me pause and say it’s no use in expecting people to understand you when you don’t know how to communicate at all. Good communication skills are imperative for healthy relationships to exist. If you are of the mentality that the people in your life should be so in tune with you that you don’t have to speak up and say what’s on your heart; then you my friend are completely delusional and you will have to suffer with the reality that you are the one who is ruining your chances of having success in regards to quality people in your life. Quality people will grow tired of drama queens and kings who want people to put up with their head games day in and day out. Listen, you will wear yourself out along with every good person who comes in your life if you think people will live under constant warfare of this kind. It’s seriously draining and just too much. I’m trying to tell you that no matter how good looking or successful you think you are; no one wants to deal with a person who doesn’t know how to communicate properly. If as of today, you’ve convinced yourself to think this kind of mindset is acceptable, I guarantee you at some point in your future (sooner than later) you will come to grips with the fact that you have alienated exceptional people from your life because you play too many mind games. You will be left alone and will have to deal with the reality that you have nothing but a bunch of failed relationships as a reminder that you’re not getting it. This kind of behavior is a problem and a sign that there is a huge language barrier when it comes to you and people who are trying to go places. Someone with a great future can’t be tied to some head case who refuses to accept that not everyone speaks passive aggressive. See, some people are not out here relying on the silent treatment to make points to the people around them. There are people who are genuinely going places in life and no matter how much they love you, the last thing they need to be tied to are people who always want to play silly games. People who are growing and maturing need people who know how to “use their words” as we say to the children when they’re crying about something they want when they’re in preschool.

People who are going places are those who are looking for relationships with grown ups who aren’t into being manipulative and dramatic. There is nothing more aggravating than dealing with an individual who looks like an adult but acts like a 8 year old. Sadly, this is a humongous language barrier that a lot of successful people who are trying to take off in life are having to deal with in their relationships. This kind of pathological thinking can infect and effect family, romantic and business relationships; because all of these connections require maturity and a desire to be reasonable. People going somewhere in life need to be linked up with likeminded individuals who are willing to make the effort to try and understand what the other person is trying to say.

The sad truth is a lot of people don’t understand each other and simply aren’t willing to do what it takes to get an understanding. So, even when two people don’t quite get what the other person is trying to verbally communicate, many resort to another way of expressing themselves called body language and gestures. A lot of people love to throw off and express what’s going on in their heart and mind by using body language also known as caveman talk. See, some people use caveman talk because it’s easy and even if you don’t understand the words that are coming out of my mouth, you can certainly understand the cues I’m sending you physically and the attitude in which I do it. This is how the unskilled in speech pretty much get all of their ideas and feelings across to those who they often don’t think “get” what they’re trying to say. See, you know when you’re talking to someone and they’re in agreement with you because they normally respond by smiling or nodding. But when the person you’re speaking with is not receiving what you’re saying, they often frown, avoid eye contact,..you know the caveman techniques. Don’t act like you don’t. We all know what we are doing when we’re sitting there rolling our eyes, twisting our faces and grunting and groaning when someone is trying to talk to us about something we don’t want to hear. You know you’re sending a strong message to the person you’re supposedly “communicating” with.

Not opening your mouth and working to get past the language barriers you’re having with another person is the highest form of ignorance and speaks to a person’s immaturity and lack of desire to take off and ascend. Sending out subliminal messages and never confronting a person about how you really and truly feel can only lead to even more hostility, confusion and misunderstandings.

So here’s my advice today for all of you who are going places. First, work on improving your communication skills and your capacity to embrace and understand other people who don’t think and operate like you. Change your perspective when it comes to thinking that your way of doing things and seeing things is the only way that exists. Be mindful that a lot of people have been taught different than you have and realize that different is just differently. Just because someone speaks another language or has different goals or ideas than you, they shouldn’t be looked down upon. Someone not too long ago in a joking way called me ghetto. My first reaction was to be offended, but what harm could they have meant? It was a joke after all. Or was it? Anyway, I quickly recovered and laughed. I laughed because that probably was their true heart about me and no matter what I’ve done to help them soar, I understand I can’t change how they perceive me. I laughed because maybe I am ghetto to them. But, what if that person just doesn’t speak my language? At the end of the day, other people’s assumptions about who you are can only be based on their limited perspective. I laughed really hard because in all honesty, I helped that person a great deal in getting to where they are today. So if I’m ghetto, what are they? LOL. The lesson from all of this is, some people will place barriers between themselves and others and once that happens they ultimately limit how far that relationship can go from that moment on. O well, you can’t soar with everyone; especially someone who thinks they’re better than you. There’s a popular quote and I’m not sure who said it but it goes;

“The greatest distance between two people is misunderstanding.”

To all my coachable friends, Whatever you do, try to understand others. And when you humble yourself and approach people with that mentality, I’m sure you’re soon headed for a clear take off in life! 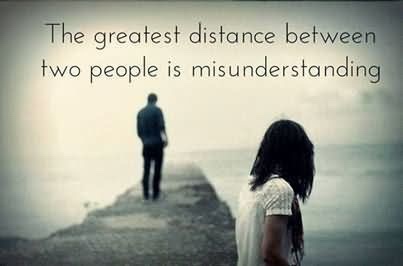 5 thoughts on “Dealing with Language Barriers When Traveling”